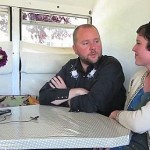 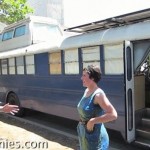 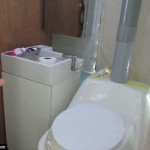 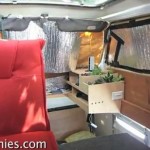 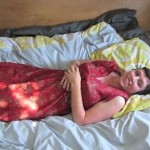 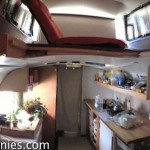 As a teenager, Richard dreamed of making a home out of a vehicle. Over a decade later, he met Rachel and soon after she agreed to move aboard a bus, they were planning their new mobile home.

After buying a used school bus for $3000, Richard and Rachel drafted autoCAD plans and began to design every detail of their new home, something that was important in their decision not to simply buy a used RV or mobile home (which they view as flimsier than a steel-framed bus).

Their furniture is all hand-built and much of it becomes a bed. They also hacked some IKEA pieces to fit their space: a shoe cozy holds their trash and recycling bins and rolling drawers that snap into place became their cupboard.

To create a totally off-grid dwelling they mounted 6 solar panels (bought off ebay at $200 a piece) on the roof for a total of 770 watts. Propane feeds their catalytic heater and will soon feed their stove and oven, though for now they are using a butane camp stove for cooking.

Since Richard and Rachel are building their home without a mortgage, they build as they have the money for each new phase. They still don’t have plumbing (they wash dishes with vinegar and shower in other locations every 2 or 3 days). They recently replaced their emergency toilet with a composting toilet.

They waited 5 years for technology to reach a point where they could “convert sunlight into ice cubes” with the world’s first upright, front-loading solar fridge and freezer.

The conversion has cost them about $12,000 so far, including the price of the bus so the $1200 solar fridge and similarly-priced solar-powered composting toilet were big decisions, but necessary to maintain their off-grid lifestyle.

* This video was filmed entirely by Johnny Sanphillippo, himself an owner of a mortgage-free tiny home: faircompanies.com/videos/view/mortgage-f­ree-tiny-home-on-a-housekeepers-salary/