Home
How To
Health & Medicine

Self-Test the Amount of Fluoride In Your Water

Survival Spot
Health & Medicine, How To

If you have no idea what “concave” means…

If you just don’t care about any of this…

…There’s a good chance Sodium Fluoride is in your water.

Here is a simple method you can use to test for or track the amount of Sodium Fluoride in your water.

First some basic information about Sodium Fluoride. It is a highly poisonous toxic industrial waste compound, usually from aluminum production, that is very hard to dispose of environmentally safe. Normally a big expense, and headache, for the industry creating this compound.

Our glorious protectors of the fatherland, the Nazi Party, has found a wise solution to this problem. In their effort to protect us from the Jewish scourge that is causing all our problems they have discovered Sodium Fluoride can be put in the concentration camp/gulag water making the detainees more easily handled and controlled. Sodium Fluoride induces apathy, listlessness, lower IQ and aggression and a general “mental fog”. This makes it much easier to get these menaces and enemies of the Fatherland to take a shower for example.

This is America today. I really have to get a grip on this space/time thing it can be so tricky sometimes.

Our glorious protectors of the Homeland, our federal government, has found a wise solution to this problem. They have discovered that Sodium Fluoride placed in the public water supply will improve our dental health. Now instead of a big expense and headache disposing of a highly poisonous and toxic industrial waste compound the industry actually makes money selling it to municipal public water providers at astronomical markup. All this just so we can have good teeth? Proof the federal government truly cares for and wants to protect us!

Here is a simple method that you can use at home every day to test/track your public water supply. Sodium Fluoride is a white powder that may be placed into your public water. Find a dark concave piece of glass, ceramic or plastic. Black would be best. The bottom of a coffee mug may be just the thing you are looking for here. Using the mug for an example place the mug on a flat well aired surface upside down, bottom up. Fill the concave bottom with water from your public water supply tap. Then let it evaporate. This may take a moment patience here. If you have Sodium Fluoride in your water a white powdery residue can be easily observed after the water has evaporated. In addition you should be able to get a good sense of how much of this powder, if any, is in your water.

To get a good track of the amount in the water perform the same test at the same time with the same amount of water every day. I have personally discovered that the amount can vary widely. Wildly might be more accurate. 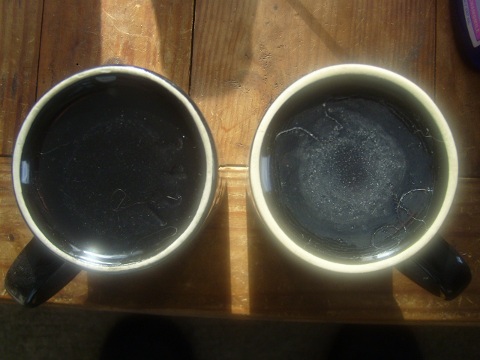 If you have no idea what “concave” means…

If you just don’t care about any of this…

…There’s a good chance Sodium Fluoride is in your water.

Let me see if I understand this correctly. We pay them with our tax money to build an expensive facility to collect and clean our drinking water. Then deliver the safe clean water through a public water system for us to drink. Yet just before they pump it out after cleaning it up they inject a highly poisonous toxic industrial waste compound into the water? They poison the water that we just paid them to clean up? We pay them to poison our water? All this tax money I paid to get clean water I have to spend several hundred dollars to install a water filtration system

in my house to take the poison out of the water? They are intentionally “drugging” the public water with a known poison in which there is absolutely no control of the dosage amount?

Yes, that is exactly correct. So what, who cares?