How To Avoid A Bear Attack

Survival Spot
How To, Outdoors

A bear attack is one of those things everyone thinks can’t happen to them. But as the world becomes more and more overpopulated, the need to build further and further into the wilderness has lead to frequent run ins with these intimidating animals in more remote places like Alaska. Even in the lower states, bear attacks can become a serious concern for avid outdoor enthusiasts such as myself.

Find out below how to avoid being attacked by a bear or worse, being a story on the evening news. 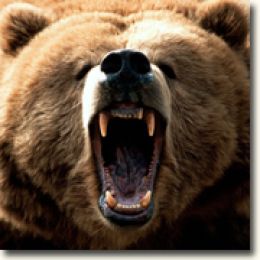 The first and most crucial thing to know about bears is that they all have different characteristics. Bears in general are extremely intelligent animals, each with their own unique personality. Since each bear is different, the way a bear reacts in any situation will also be different. The key things to remember about bears is that if you avoid them and keep your distance, you will likely walk away from the situation.

The Black bear, while dangerous is the least aggressive of the bears. Black bears tend to be more reclusive and less threatened by the presence of humans even when protecting their cubs. While Black bears are more statistically likely to attack than other breeds, the cause is likely due to their enormous population compared to other bears. In North America there are over 500,000 Black bears compared to around 75,000 Grizzlies.

Signs of Aggression: Swatting the ground or objects, chattering teeth, loud blowing noises
*Note* Black bears will often stand on their hind legs, not as an intention of attack but simply to see and smell better.

Also known as the Kodiak bear, the Brown bear is one big animal (the biggest sub species of Brown bear). Some have been weighed at over 1500 lbs. Kodiak bears are generally shy and reclusive, but can become extremely aggressive if surprised or threatened.

Signs of aggression: Ears back, foam at the mouth

The Grizzly bear is known as the most aggressive of the bear species. Unlike with the Brown bear, climbing a tree will not help you escape from a angry Grizzly. The female Grizzly is particularly dangerous, being responsible for over 70% of fatal human injuries.

Signs of aggression: Ears back, foam at the mouth

Polar bears are fierce and stealthy hunters. They can kill any animal they choose and are by no means afraid of humans. What makes the polar bear particularly dangerous is that when it decides to kill it uses stealth until the very last second, when it’s too late. Despite their expert killing skills, the Polar bear generally avoids humans and are so few in number in that attacks in the wild are rare.

Despite the false rumors, bears are typically not out looking for humans to eat and in fact are often frightened by human activities in or around their natural habitat. Being loud BEFORE you see a bear is one of the best ways to avoid the bears. However, if you find yourself in a situation where you are face to face to with a threatening bear this rule does not apply. Talk loudly, scream, shout and use your bear bells to make as much noise as possible. You can also raise both your arms in air and try to make yourself look large and threatening, in an effort to scare the animal away. It is always best to try to avoid contact if in any way possible.

The easiest way to avoid bears is to be knowledgeable of your area and avoid areas known to be heavily populated with bears. Look for trees with large chunks of bark missing since bears will often mark their territories by rubbing on tress. Another sign of a bear is large holes which are dug during hunting.

Meat items are especially attractive to bears, but avoids sweets, candy and junk food as well.  The best foods are those that carry little odor.

If you see a bear from a far, be sure to sotp approaching the bear. Do not run away, but slowly retreat from the area.

Partially eaten/decomposed animals may be a current source of food for a bear so don’t make camp near any.

Don’t explore dark caves or hollowed logs, these are often used as dens by bears

Bear bells make a lot of noise, which helps prevent surprise encounters with a bear.

Odor proof bags can prevent those tasty smells from reaching the bear. Bears have a sense of smell four times that of the average dog and can smell for miles away.

A bear bag is a great way to keep your food away from your tent and away from bears. If a bear does becomes attracted to your food, he will not be inside your tent or car looking for it.

How to hang your bear bag
(click for a larger image)


(thanks to Allen and Mike’s Really Cool Backpackin’ Book: Traveling & camping skills for a wilderness environment

– A simple net and rope can create a decent bear bag.

Gun – A gun significantly increases your chance of surviving and deterring a bear attack. A loud gun would be better for scaring bears.