Comparisons to the Great Depression Keep Popping Up

By Adam Shell, USA TODAY
NEW YORK — The images of bread lines, dust storms and squatters’ camps are missing in the aftermath of the worst financial crisis since the Great Depression. Stocks have rebounded sharply from the 12-year low hit in March 2009 during the Great Recession. The U.S. economy, while still sluggish, is growing again. And fears of financial Armageddon have mostly faded. 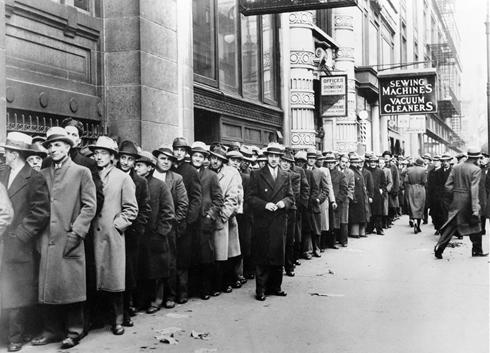 Yet comparisons to the woeful 1930s continue to pop up in Wall Street research reports, newspaper op-ed pieces, doomsday books and the financial blogosphere. There is a nagging sense that the roller coaster ride investors have been on since the 2008-09 financial meltdown may not be over — and that a ’30s-style boom-bust, boom-bust cycle can’t yet be ruled out — as the economy and markets muddle through the difficult post-bubble workout period.

Fueling the angst is fear that the still-fragile, jobs-starved economy will suffer a relapse, or double dip, as government stimulus is phased out. Consider:

•In a recent note to clients, David Rosenberg, chief strategist at Gluskin Sheff, ticks off a slew of similarities between then and now under the heading, “Daring to Compare Today to the ’30s.”

•Donald Luskin, chief investment officer at Trend Macrolytics, penned an op-ed piece, “Why This Isn’t Like 1938 — At Least Not Yet.”

•In late June, Paul Krugman, professor of economics and international affairs at Princeton University and an op-ed columnist for The New York Times, zeroed in on the issue twice under provocative headlines: “That ’30s Feeling” and “The Third Depression.”

Why all the hand-wringing over the ’30s? “To focus people on risk and remind them that it is way too early to declare victory,” Luskin says. “It is prudent to learn from past errors so we don’t repeat them.”

Stock charts that overlay current stock-price action to that of the 1930s look very much the same at similar stages of the recovery. The difference is 80 years ago the market suffered another major down leg. The future will show if the market suffers a similar fate, or whether it stabilizes and powers higher.

Welcome to the uncertain, post-bubble world. History has shown that when financial bubbles burst the fallout is not resolved overnight.

Typically, after once-in-a-generation-type declines, powerful rebounds tend to occur, but the trajectory is never straight up. Relief rallies are often followed by big dips, which are then followed by fresh rallies and sell-offs.

New highs often don’t materialize for years, if at all. Ten years after super-pricey tech stocks crashed in 2000, the Nasdaq composite remains 56.8% below its record high. Similarly, Japan’s benchmark stock index, the Nikkei 225, is down 75.8% since its stock and real estate bubble burst in late 1989.

Consider the aftermath of the 1929 stock market crash. After an initial drop of nearly 48% the Dow enjoyed five bull market rallies, with gains ranging from 23.4% to 48%, says Dow Jones Indexes. But each rebound was followed by a sizable relapse, with declines from 37.4% to 53.6%. Each relapse led to lower lows and the Dow’s eventual record bear market decline of 89.2%. The Dow took 25 years to hit a new high.

Bears say investors today should prepare themselves for similar volatility. They have gotten a dose of big swings already. After the Dow’s 53.7% drop in the 2007-09 bear market, it has rallied as much as 71%, only to suffer a recent correction of 13.6%.

Working through the problems caused by the wealth destruction due to the real estate bust, 8.5 million lost jobs and the worst stock decline since the 1930s will take time. The initial economic rebound may prove fleeting, bears argue, which could cause stock prices, which have been rising on the hopes of a sustainable recovery, to head back down if those expectations are not met.

In recent weeks, a spate of economic reports have come in weaker than expected, fueling double-dip fears. In July, readings on manufacturing, retail sales, factory orders, employment, auto and home sales came in light. Last Wednesday, minutes of the Federal Reserve’s June meeting indicated it expects growth to slow in the second half, prompting the central bank to lower its 2010 growth outlook to as low as 3%.

In the words of former Fed chief Alan Greenspan, the economy has hit an “invisible wall.”

The biggest argument for an economic relapse is the notion that the recovery has been fueled by government stimulus and easy-money policies from the Fed. The fear is that once the government’s steroid-like stimulus wears off, the economy won’t be able to grow on its own.

“Most of the growth has come from Uncle Sam’s generosity,” Rosenberg says. “That’s what is keeping the economy together. When the central bank and the government pull back on the stimulus, double-dip risks rise.”

The end of government subsidies resulted in a 33% drop in sales of new homes and autos last month.

The lack of job growth, coupled with consumers and homeowners that are riddled with debt, will make it harder for the consumer-driven U.S. economy to grow its way out of its problems, says Rodney Johnson, portfolio manager for the Dent Tactical ETF.

The national unemployment rate stands at 9.5%, or more than 14 million Americans, says the Department of Labor, far below the peak unemployment rate of 25% during the Great Depression. But those numbers don’t fully convey the jobs weakness. Another 8.6 million people are working part time because they can’t get full-time jobs. And 3.8 million, discouraged by the dearth of job opportunities, are out of work but were not counted as unemployed.

“If you’re not making money, it’s pretty hard to spend it,” or pay bills, Johnson says. “There’s no fuel in the economic engine to make it grow. People are spending less and saving more.”

Further crimping the outlook for future growth is the fact that cash-rich U.S. companies, despite improving profitability, are still leery of the recovery and are reluctant to deploy that money to grow or hire new workers.

“Companies have pared their expenses dramatically, upgraded their technology, improved their profit margins,” Johnson says. “But they are not hiring more people, because they would have to see greater demand to do so.”

Another potential growth killer is what Wall Street perceives as an anti-business, growth-choking stance from the Obama administration. “Obama is anti-business, and business is anti-Obama; this is the ‘meme du jour,’ ” economist Edward Yardeni says.

Many investors also worry about a “policy mistake.” They fear, for example, that when the Fed starts to raise short-term interest rates — which the Fed has hinted is not on the immediate horizon — they might move too aggressively and slow the economy down just when it can least afford to decelerate. Ill-timed deficit reduction policies, such as tax increases, could snarl growth as well.

A move toward protectionist trade policies also worries investors, as does Europe’s debt troubles, which could also impede the U.S. recovery.

Odds are against double dip

But a double dip is not a likely outcome, says James Stack, editor of investment newsletter InvesTech Research. There has been only one such relapse in history. It occurred in the early 1980s.

“The double-dip debate,” Stack says, “is one that is very often visited in the first 18 months of a bull market.” When the economy is in early stages of recovery, investor doubts about the sustainability of the rebound are common, he says. “But the odds are against a double dip,” he says.

Stack does not see evidence that suggests a bad outcome — at least not yet. The stock market tends to fare worse when optimism is sky-high. That is not the case now. A July 7 poll conducted by the American Association of Individual Investors showed bears outnumbering bulls by almost 3-to-1. The 17 times that has occurred since 1988, stocks were up 15 times both three and six months later, InvesTech Research shows. But the most recent AAII poll showed less bears than bulls.

What’s more, Stack has yet to see other warning signs that would indicate that stocks and the economy are poised to roll over — namely a massive plunge in consumer confidence and a stock rally led by just a handful of stocks.

But a red flag was raised Friday. The University of Michigan’s index of consumer sentiment in July fell unexpectedly to an 11-month low after its best reading since January 2008 last month. The market is also still getting broad participation from a large number of stocks, a sign of health.

And while investors are looking at a slower recovery, slow growth, he stresses, does not equate to a double dip.

“Until we see a deterioration in market breadth and leadership, we are giving the bull market the benefit of the doubt,” says Stack, who currently has 95% of assets invested in stocks.

Another reason to be upbeat about the market’s future is the fact that Federal Reserve Chairman Ben Bernanke is a student of the Depression, Luskin says. And that means Bernanke is unlikely to repeat the mistakes made in the 1930s that choked off growth. Bernanke won’t likely tighten interest rates too quickly or drain liquidity out of the system too fast, as such moves would jeopardize the recovery. Luskin doesn’t see a double dip, nor does he see new highs for stocks anytime soon.

Another big difference between today’s market and the 1930s is that stocks went into the current crisis selling at much lower prices relative to their earnings, Luskin adds. Unlike 1929 and 2000, stocks did not crash because they were overpriced. Stocks are now trading below long-term valuations.

The start of the second-quarter earnings season has also given bulls hope, as companies ranging from aluminum maker Alcoa to railroad CSX to computer-chip maker Intel have not only topped analysts’ expectations but have also had positive things to say about the future. JPMorgan also beat forecasts, but the bank put a damper on things when it provided cautious statements about the economy going forward.

Some advice for investors

So how should one manage money in an era of unpredictability and volatility?

Rosenberg advises investors to stay liquid, keep debts low, save more and invest less in risky assets like stocks. He doesn’t advise 100% cash. Buy some gold, high-quality bonds and assets that don’t go up or down with stocks, he says.

“If you were putting a dime in a cookie jar, maybe stick in 20 cents,” Rosenberg says. “If you have the capacity to live a frugal life, do so.”

In periods of great volatility, where stocks have the potential to post huge gains — and huge losses — it makes sense to put only half the money you would normally devote to stocks in the market, Luskin says. Thus, you will be able to book gains if stocks rally. And you will lose half as much if stocks plunge.